← more from
Mouthwatering Records
Get fresh music recommendations delivered to your inbox every Friday.
We've updated our Terms of Use. You can review the changes here. 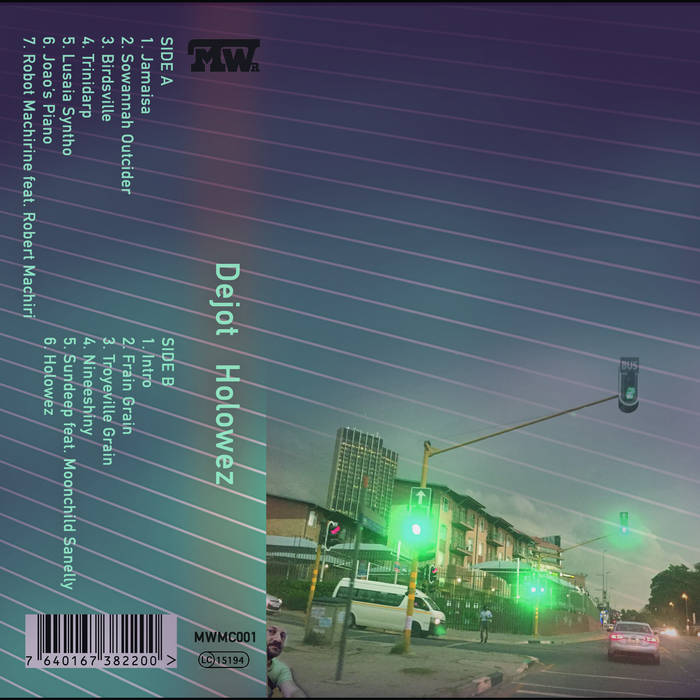 Memory is a creative act, not counting the input as catalyst it’s almost entirely based on the faculties of the imagination. That’s how Holowez, the latest release from Bern-based producer Dejot (aka Daniel Jakob) should be understood: as a creative negotiation between a sonic document of actual events and its human memory analog. The project started with a hard-drive of 40-something songs that Daniel recorded during a 3-month long stay in Joburg (Johannesburg), South Africa, back in 2016. The production process which turned the raw material into the final version of the record – as well as its soon to be released follow up – happened in spurts, over the span of two years. The work was as much about revisiting and reshaping the initial compositions as it was about applying some of this dub logic to the fabric of the actual memories, and then feeding these insights back into the songs.

I started to build an imaginary world in my head, a mixture of what I documented with my photos, all types of latent impressions and, of course, my memories. It was as if I was creating a different take on reality, and this reflected in the music. – Dejot

Holowez is an auteur electronica record, one teetering between a focused club functionality – heavily engaged with South African rhythmic sensibilities – and a fluent deployment of a whole array of experimental vernaculars. It’s a work that is layered and replete with field recordings: full of collected textures, padded with a meticulously sculpted, radiant low end and bracketed off by a cornucopia of swinging, jagged polyrhythms. In its sensibilities it simultaneously evokes a haunted sense of space so prevalent in Burial’s productions – though this is rendered here in much brighter and more optimistic tones – and the sound-as-painting approach found on the recent compositions of Fourth World advocate Jon Hassell. Fundamentally, though, Holewez is a very intimate work which is firmly rooted in personal experiences and a thick maze of introspection.

"I wanted to make something mystical and visually driven, like a progressive sequence of scenes. This is also why there are no breaks between the songs. The experience of listening to the record should feel like you’re reading through my diary." – Dejot

The recordings feature a host of South African talent though this might not be legible at first as much of these recordings underwent a series of studio mutations. Vocal artefacts taken from a session with Moonchild Sanelly – the same one who recently played with the Gorillaz and toured with Die Antwoord – appear as percussive elements on the title track, reinforcing the main groove. Moonchild also sang on the sticky interlude entitled Sundeep, ⁄which could’ve just as easily morphed into a prime-time club anthem. Sowannah Outcider is based on a loop that congealed during a jam session with artist Robert Machiri. The artist’s voice also graces the trippy Robot Machirine chant which splits the release in two, dividing the more ambient compositions from the clubbier batch. The sprawl of field recordings found on this release is reminiscent of pages torn out of a diary, shuffled like a deck of cards and then laid out on the table in new configurations. There are layers of texture lining just about every song on the release – displaced moments and extracted/abstracted spaces. In a sense, you are constantly swimming in a collage of recollections. Recordings from a Zulu Sangoma initiation frame the song entitled Frain Grain. There is also the sound of hundreds of people singing and dancing in the water, which was recorded at a Durban beach – this is buried deep in the fabric of sound design for Robot Machirine. And then there’s a pitched down recording of Durban birds doing their thing found on Birdsville, that and kids screaming.

Experimental, at times clubby, warm, off-kilter, intertextual, intimate and so inviting, these are some things that come to mind while listening to Holowez. Part two of this series, also a full length, entitled Uhujano will be released on February 15. It will showcase the more dance floor and radio friendly selection of cuts that materialised from these sessions. Stay tuned!

Dejot aka Daniel Jakob (aka Dubokaj) is a Swiss electronica producer. He has been steadily producing music since the 90s, collaborating with the likes of Lee Scratch Perry, Yello, Nicolette. He also remixed songs for artists such as Imogen Heap, Pressure Drop, Dawn Penn, Bonaparte etc. He's been producer of famous laptop street busking and dub influenced electronic act
Filewile. ... more

Bandcamp Daily  your guide to the world of Bandcamp